It's been busy. I've been busy but somewhere in there I finished Gone!!! And it's live now!


So here it is with a few of the links if you want it! 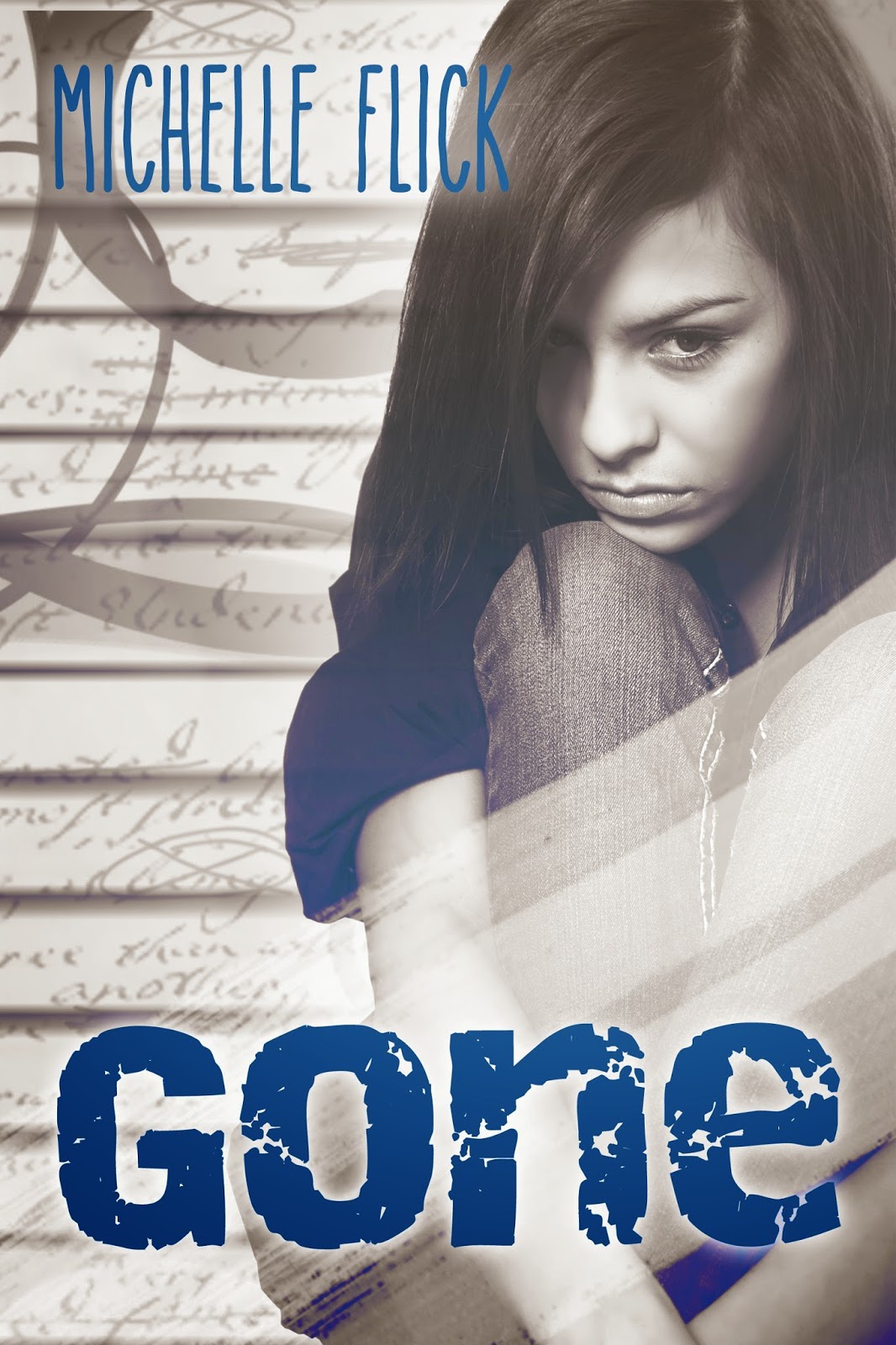 Tess Waters’ life is perfect. She has everything she’s ever wanted all wrapped up in her boyfriend Alec. But Alec has a different plan and one day, he’s gone.
Tess is devastated. She doesn’t remember how to be herself and she doesn’t want to. Her family believes she needs to move on and get over him. It’s easier said than done. Tess doesn’t know where to begin because everywhere she turns, she thinks of Alec. She doesn’t think this heartbreak will ever stop.
Eventually, Tess finds comfort in places she never realized she had. From there she discovers a person she never knew she could be.

Find it for ebook on Amazon and paperback on Amazon

This is my third published book, but I started it way before anything else I've written. It's a story that if you have ever been heartbroken, you will be able to relate to Tess. Heartbreak is that universal bond people share.

I hope you enjoy it and drop me a line to let me know what you think!
Posted by Michelle Flick at 1:50 PM 11 comments:

Cover Reveal: GONE by me :)

I'm super excited to be sharing my cover Gone with you! 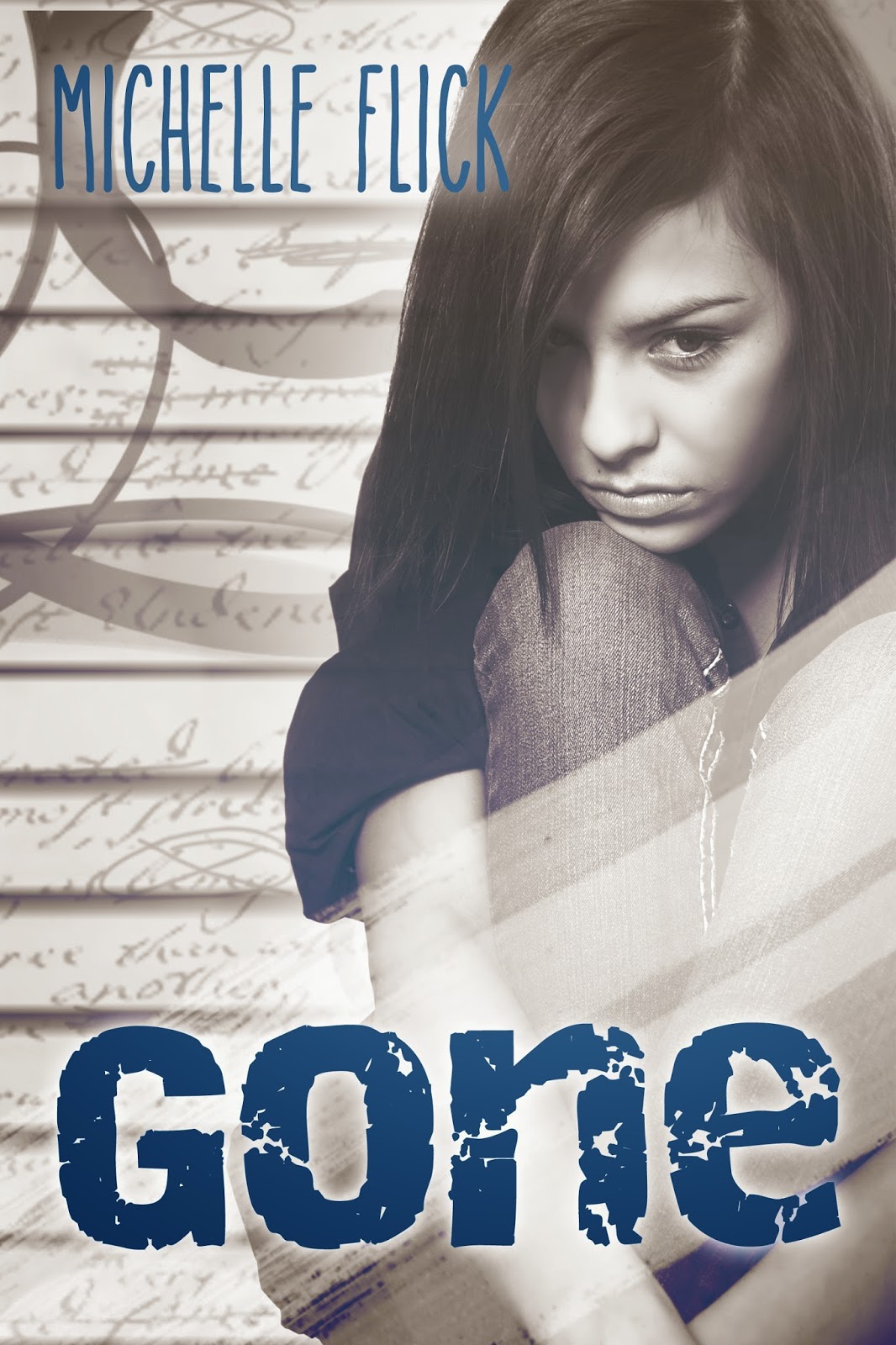 I found this gem on Sprinkles on Top's website and felt it really encompassed Tess, at her weakest moment in the novel. It was originally done in pink - but when you read the novel, you will get why blue is a more fitting color for the cover.


The novel: it's about a girl named Tess who is so wrapped up in her boyfriend, that when he ends it, she doesn't know how to function without him. She finds help in her family and friends. I love this story because it's about picking yourself up BUT it's also about having friends and family help you!

Tess Waters’ life is perfect. She has everything she’s ever wanted all wrapped up in her boyfriend Alec. But Alec has a different plan and one day, he’s gone.
Tess is devastated. She doesn’t remember how to be herself and she doesn’t want to. Her family believes she needs to move on and get over him. It’s easier said than done. Tess doesn’t know where to begin because everywhere she turns, she thinks of Alec. She doesn’t think this heartbreak will ever stop.


Eventually, Tess finds comfort in places she never realized she had. From there she discovers a person she never knew she could be.

You can add GONE on Goodreads here.

Tell me what you think!
Posted by Michelle Flick at 1:30 AM 2 comments: 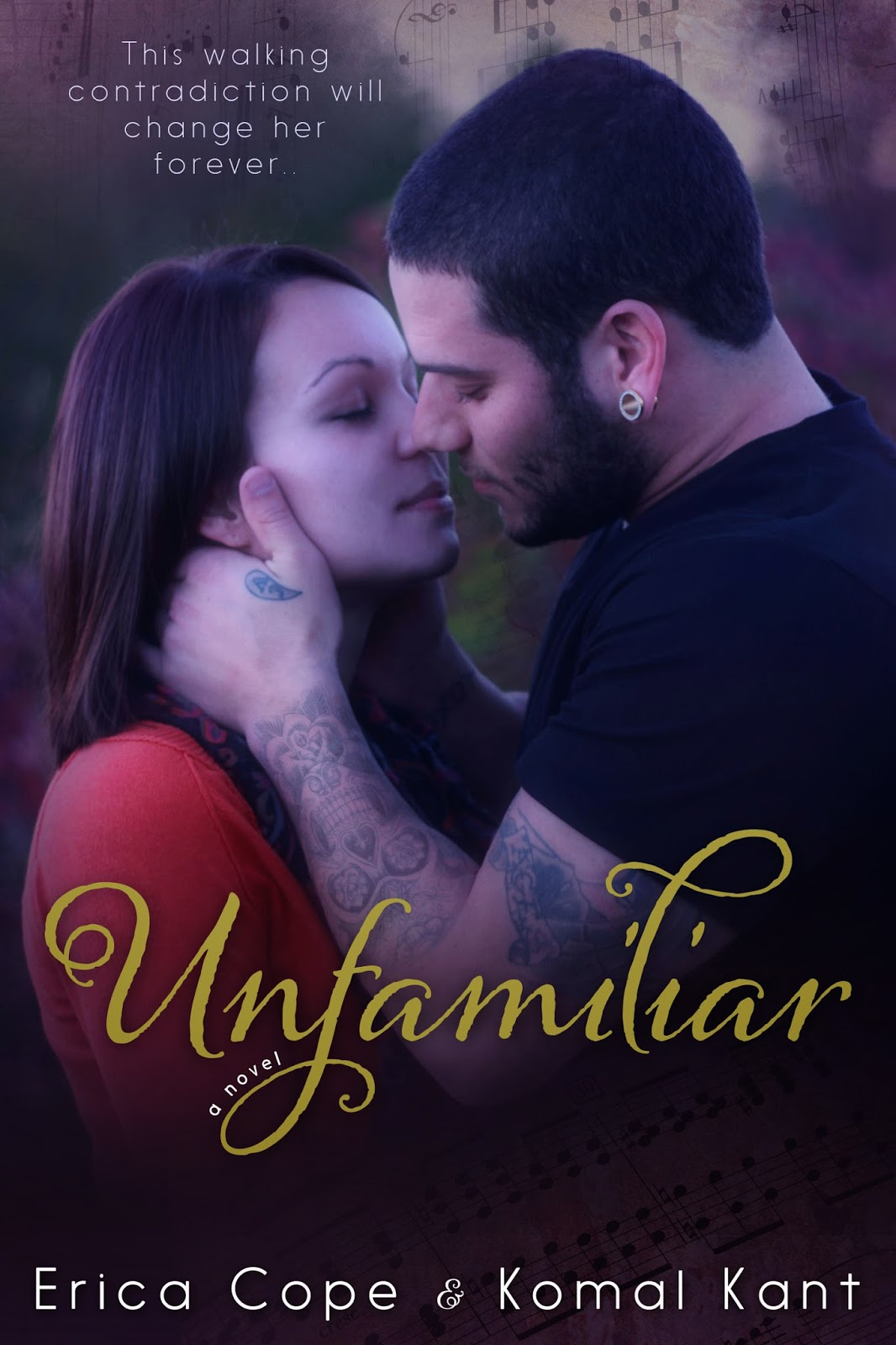 Two awesome authors and two very dear friends wrote a book together! I have been lucky to have been a witness to some of their brainstorming, problem solving and over all excitement!

Here is a snippet for you!!!

"I brought my lips toward her as my hands glided over the side of her sweater dress, finally resting on her hips. “Everything about this feels right. I want you to be mine. I want to love you like he never has. He’s never given you a chance to grow or to live your life. You need to get busy living your life and making your own choices.”                   Hailey’s eyes fell on my lips, and I didn’t hesitate. I pulled her in for a kiss that had my insides aching. The kiss was gentle at first but then it filled with urgency, like we were the last two people left on the earth. My tongue darted in her mouth, my mouth crushed hers, and when Hailey let out a moan, I pushed her against the table so hard that it scraped against the floor.
“Tell me you want me,” I said in a low voice as I kissed the soft skin of her neck. “Tell me that you choose me.”

You can find it here:
Goodreads
Amazon

We Were Us Cover Reveal - Heather Diemer

Smokin' hot. That's what my friend Heather Diemer's cover shows me! This is her debut novel and I have already read bits and pieces of it - again - smoking' hot. 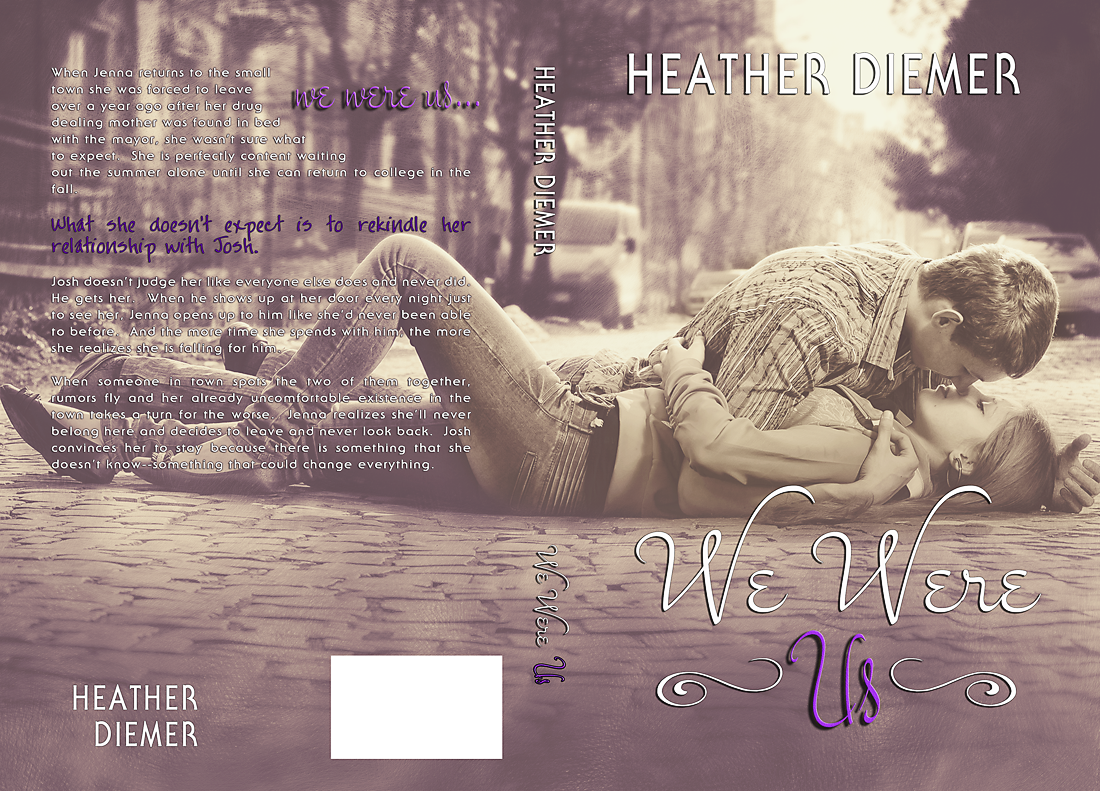 When Jenna returns to the small town she was forced to leave over a year ago after her drug dealing mother was found in bed with the mayor, she wasn’t sure what to expect.  She is perfectly content waiting out the summer alone until she can return to college in the fall.

What she doesn’t expect was to rekindle her relationship with Josh.

Josh doesn’t judge her like everyone else does and never did.  He gets her.  When he shows up at her door every night just to see her, Jenna opens up to him like she’d never been able to before.  And the more time she spends with him, the more she realizes she is falling for him.

When someone in town spots the two of them together, rumors fly and her already uncomfortable existence in the town takes a turn for the worse.  Jenna realizes she’ll never belong here and decides to leave and never look back.  Josh convinces her to stay because there is something that she doesn’t know--something that could change everything.

This is coming to you in APRIL!!

Music! Do you hear the music? Not to sound crazy but I hear a soundtrack as much as I hear the dialogue of my characters in my head.

I'm currently working on a contemporary WIP titled Gone.  It's my first crack at this genre, well second,  I don't know. I wrote the basis of the story about six years ago and am pulling it out now.

It's about a girl named Tess Walters. She's been in a high school relationship for three years and her life is routinely perfect. Until her boyfriend Alec becomes her ex boyfriend Alec and her world is whipped away from her. She can't function. She cries. She fights. She's mean. She cannot deal.

She does have a few people in her corner once she takes a breath. They help her.

But - I have a soundtrack I wanted to share with you.

1. Taylor Swift - White Horse (pains me but it's true.)
2. Unanswered Prayers by Garth Brooks
3. Please Don't Leave Me - Pink (because I have her on every writing sound track
4. Part of me by Katy Perry
5. With or Without You - U2
6. Mama's Broken Heart - Miranda Lambert
7. And Still - Reba McEntire
8. Why They Call It Falling - LeeAnn Womack
9. Bring on the Rain - Jodee Messina
10 Defying Gravity - Wicked Soundtrack

Sappy and melodramatic - just the way I like it.

These ten songs are somewhere in my playlist.

My turn on the Walker Book Tour!

Inspiration is a hard thing to talk about. But my friend Erica brought it up to me and I thought I would talk about my inspiration for Walker. 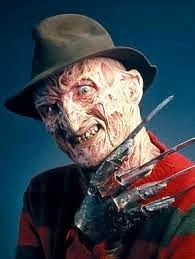 I can say it was a giant miss mash of ideas.

I originally saw a dialogue between Kate and Jesse. And thought that could be something. Then my collie walked into the room and she's a great example of what a good dog is. (I have a mastiff too - equally as good). So I thought - Fergie should be forever immortalized among pages.

But I LOVE LOVE LOVE paranormal. It's hard for not to put something paranormal or supernatural in to my stories. I mean who doesn't love a vampire or a telepath? So I had to think about something that isn't done often.

Know what popped into my head? Freddy Krueger. Dude - he is scary! You can fight him - he's in your dreams. Then my idea was born. Serial killer - dream walker. But seriously - look at Freddy's face. Blah. I knew immediately where I wanted to go with that story arc, but there was this whole other piece missing to my story - Kate's real life.

This took awhile - I wanted a conflict of love interest - Colton. I wanted a queen bee - because it's fun to be mean fictionally. I wanted a friend who was out-spoken - a little vulgar. Elise. That story arc developed as I wrote. I really wasn't sure how I was going to have that part of the story end - it just did. Does that sound bad?

Anyway - thanks for stopping. Enter and tweet about my giveaway and you can meet my inspirations!

a Rafflecopter giveaway
Posted by Michelle Flick at 12:00 AM No comments:

It starts today at Erica Cope's blog! Stop by her to see a character interview from Elise! (She's really kind of a hit!)

Walker is my second novel and has been a lot of fun to do. Throughout this tour I am going to be giving away signed paperbacks of Walker so make sure to enter! (You can tweet every day!) Kate isn’t thrilled to be moving to the middle of nowhere. She's already lost her parents, now she's leaving the only place she's ever known as home. She’s not there long when she realizes her dreams aren’t her own and that she has the ability to walk through other people's dreams. Not only that, but she might have found her dream guy--literally. He's in her dreams.
Just when she starts to get the hang of dream walking, strange murders in her new town start to occur. Girls are being killed as they sleep with no evidence, no suspects and no clear motive behind the deaths. It doesn’t take Kate very long to realize that the girls aren’t just being killed as they sleep—they’re being killed in their sleep.
Kate must figure out how to find the killer in the real world and keep the ones she loves safe while they sleep.

Here is a schedule of all the stops!

a Rafflecopter giveaway
Posted by Michelle Flick at 12:00 AM 1 comment:

Where to find Walker 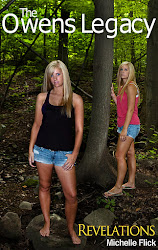 Click on the picture for a summary of the book. Be on the look out for reviews of the book from my wonderful blogging buddies!

Where you can buy/find my book

Michelle Flick
A reader. A writer. An English teacher. A dog lover. A music lover. A laugher. Me in a nut shell. I recently self-published my first novel: The Owens Legacy: Revelations and working on the sequel. And while doing that I am distracting myself with anything YA.

What I have previously said :)